This is the end

It's time to wrap this old blog up, and start something new.

Still thinking about the direction of the new blog; give me some time, people, I'm a very busy woman.

Off on new adventures, once again.
Posted by Cin at 2:50 PM No comments:

It's been a year since I've posted to this blog. A whole year. Wow, blog neglect.

During that year, I have been spending what little writing time I have on a twice-monthly column for my local paper, the Times Colonist. I've had modest success with it and it's been a lot of fun. But it has also meant that I simply don't have time to blog on a regular basis.

I'm thinking of just letting the blog go and trying some new version, with a firmer focus. Hey, nothing lasts forever in this world.

P.S. Happy feast day, St. Gianna! Fifty years in the presence of the Lord! Pray for us.

Jesus, I promise You to submit myself to all that You permit to befall me; make me only know Your will. My most sweet Jesus, infinitely merciful God, most tender Father of souls, and in a particular way of the most weak, most miserable, most infirm which You carry with special tenderness between Your divine arms, I come to You to ask You, through the love and merits of Your Sacred Heart, the grace to comprehend and to do always Your holy will, the grace to confide in You, the grace to rest securely through time and eternity in Your loving divine arms. Amen.

My dear friend, happy feast day. Keep the prayers of all HG mothers close to the throne of our beloved Saviour. Love you.
Posted by Cin at 3:58 PM No comments:

When Big I. was a newborn baby, his grandfather, my husband's adopted father, was dying. Cancer had riddled his body, and as he died, my husband C. and I could not go to him; I had had a C-section and couldn't get on a plane for six weeks. C. managed to visit before the baby was born, but 13 days after I. came into this world, B left it.

A few months later, I. was baptized and his godmother gave us the gift of a CD of Christian lullabies by Michael Card. Every night, I would nurse I. to sleep in the rocker while we listened to Unseen Warriors. I often felt B.'s presence there, watching over the grandson who carried his name (I.'s middle name is B.'s name.)

One night, I started to feel the presence of someone else. And no matter how hard I tried to convince myself it was just my imagination mixed with postpartum hormones, I couldn't get rid of the feeling.

There was something evil on my front porch, watching us. Wanting my baby. Even writing these words six years later, I can feel my flesh crawling. There was a demon on my front step, and every time I called for the protection of our angel friends, our Unseen Warriors, it became seethingly furious.

After a week of this, I had had enough. I went out on the porch during the daytime, scattered holy water and holy salt, prayed, and then went inside. At bedtime, I sat in the rocker, looked at the window, and said out loud, "Lord, please send B. to go get rid of that thing." And it was gone.

When I think of spiritual attack, it is this instance that springs to mind in all its weirdness. It's like something out of a novel, or the thoughts of a crazy lady. It doesn't quite seem real. In its frightening absurdity, it shelters and hides other forms of demonic attack -- such as the one I have been experiencing for months.

Anyone who knows me well will tell you I have a terrible fear of non-existence. I used to think of it as fear of death, but dying doesn't frighten me. It's the possibility of nothing afterwards that really gets to me. It's been bothering me so much lately that I've been having little panic attacks, so much I sought some help. That help has greatly reduced my panic, but the very thought process, the doubt, still lingers. I thought I was just having doubts, even as I believed. But I think it's more than that. I think I'm being attacked again, just much more subtly.

An excellent article tonight on the way a demonic attack feels gave me a lot of perspective. It reminded me of my spiritual mentor, G., who always says, "Satan attacks any time you are in the process of a great spiritual good, especially if it has trials (which most do!)" So he attacks during that first year after a baby, when everyone's tired; or when a family is considering one more soul; or when you are trying to increase your prayer life; or when your children are sick and you are making great sacrifices of sleep and time and personal need for them; or when you are helping the poor, visiting the imprisoned, loving the sinner. He attacks seminarians and novices; he attacks people who are considering Jesus; he attacks people doing great and small works for God, neighbour, stranger and friend.

He always attacks me on my three greatest weaknesses: my fear, my pride and my gluttony. And for some reason, I always forget this happens.

In his great work The Screwtape Letters, C.S. Lewis writes about the reality of demonic attack through the fictional demon Screwtape, who gives his "nephew" Wormwood advice. At one point Screwtape addresses humans and our non-belief in the demonic:

"Our policy, for the moment, is to conceal ourselves. Of course this has not always been so. We are really faced with a cruel dilemma. When the humans disbelieve in our existence we lose all he pleasing results of direct terrorism and we make no magicians. On the other hand, when they believe in us, we cannot make them materialists and sceptics. At least, not yet. I have great hopes that we shall learn in due time how to emotionalise and mythologise their science to such an extent that what is, in effect, belief in us, (though not under that name) will creep in while the human mind remains closed to belief in the Enemy."

I think we've reached that time. I wonder how many people reading this (if anyone still reads at all) will believe my story of the demon at the window, while denying the possibility of Christ crucified and risen? And why do I, who has experienced both this and the visitation of a saint, accept the frightening experience and question the sublime one?
Posted by Cin at 11:13 PM No comments:

This language echoes in my soul, even as I never learned to speak it. My grandfather spoke Gaelic as a young man, but never taught his own children. I still remember him calling me "di dunn broayagh" or "little brown maiden" as a child.

I sometimes think it is a shame my children know little of their heritage as half-Cape Bretoners. Instead, they are wee Canadians to the core.

Minimize the window and just listen to Mary Jane Lamond sing my heritage.
Posted by Cin at 11:49 PM No comments:

From a stone to a fish

More than three years ago, I blogged about (then) Little I.'s near drowning experience during a swimming lesson. The experience left him with an enduring fear of water over his head, and a reluctance to be in the swimming pool. He was so reluctant that I pulled him out of lessons several months afterwards; he was not passing the first level after months and months, and he had asked for "a break."

However, last summer all of the older children asked to start swimming lessons again, so I enrolled them. I. and A. were in the same class in September; in January, A. moved up to Swim Kids 2, while I. repeated Swim Kids 1.

I took the boys to their last lesson of this set tonight. I.'s lesson is first, then A.'s. so I decided to bring the baby and swim with whichever boy was not in a lesson while the other practised.

I. had his lesson first, then received his swimming report card. He walked up to me, beaming, clutching the swimming badge in his wet fist. He had passed, with only two tries!

He hopped into the pool with me and Baby E. and we started to play in the water. As I watched him swim, splashing and kicking, confidently swimming underwater, I could feel my eyes pricking and my throat clenching. He was having fun, fearless fun, in the very pool where I nearly lost him. This was wonderful!

Fear is a terrible emotion to harbour; it's like a stone in your stomach, or like fluid in the lungs. It pulls you down, steals your air. And now Big. I. is free of it, free and floating. I've never been more proud of him.
Posted by Cin at 10:28 PM No comments:

New column: Back to work

Cin
A former journalist, a columnist, a PR professional. I love clean, simple writing. I hate obsfucation, fake words, misused words, the passive voice, turning a noun into a verb (STOP THAT)and when people try to make themselves sound smart by using any of these tricks. (Doesn't work, people.) 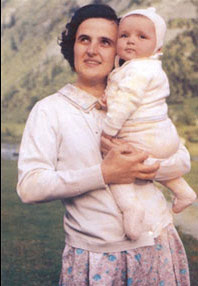 St. Gianna Molla, working mother and obstetrician, pray for us!

Jesus, I promise You to submit myself to all that You permit to befall me; make me only know Your will. My most sweet Jesus, infinitely merciful God, most tender Father of souls, and in a particular way of the most weak, most miserable, most infirm which You carry with special tenderness between Your divine arms, I come to You to ask You, through the love and merits of Your Sacred Heart, the grace to comprehend and to do always Your holy will, the grace to confide in You, the grace to rest securely through time and eternity in Your loving divine arms. Amen.

Some sites I read